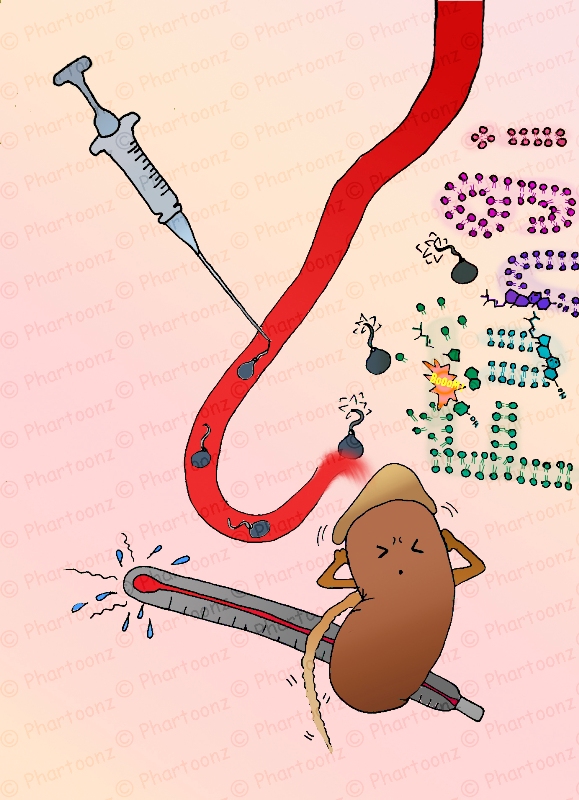 The classic antifungal is Amphotericin B.
Most species of fungi are susceptible to it,

and although it has many side effects ;

it remains the drug of choice for most serious systemic fungal infections .

Ergosterol is a vital part of the cell membranes of fungi

but, it is absent in the cell membranes of humans which contain cholesterol.

Amphotericin binds to ergosterol and selectively damages fungal cells rather than human cells.

By binding to or inhibiting ergosterol synthesis, amphotericin forms many pores

which increase the permeability of the cell membranes ,

so , cellular macromolecules and ions are lost producing irreversible damage

There is an increase in creatinine level in most patients taking this drug ,

This is reversible if the drug is stopped

The creatinine level must be followed closely,

and if it becomes too high (creatinine > 3),

the dosage may have to be lowered, terminated, or switched to alternate day regimens.

A shaking chill with fever .

Inflammation of the vein at the IV site.

These side effects are important because they are very common .

In fact , . . when amphotericin B is given in the hospital,

it is usually given with aspirin or acetaminophen to prevent the febrile reaction.

Amphotericin B in the form of IV colloidal preparation is used as a systemic antifungal ,

but , it’s is poorly absorbed from the GIT if given orally ,

so it’s not used orally for treatment of systemic disease and it’s only effective on Fungi within the lumen of the tract .

Bacteria are not effected by Amphotericin B

Thank you for the info.

Amiable fill someone in on and this mail helped me alot in my college assignement. Say thank you you for your information.

This website uses cookies to improve your experience while you navigate through the website. Out of these, the cookies that are categorized as necessary are stored on your browser as they are essential for the working of basic functionalities of the website. We also use third-party cookies that help us analyze and understand how you use this website. These cookies will be stored in your browser only with your consent. You also have the option to opt-out of these cookies. But opting out of some of these cookies may affect your browsing experience.
Necessary Always Enabled
Necessary cookies are absolutely essential for the website to function properly. These cookies ensure basic functionalities and security features of the website, anonymously.
Functional
Functional cookies help to perform certain functionalities like sharing the content of the website on social media platforms, collect feedbacks, and other third-party features.
Performance
Performance cookies are used to understand and analyze the key performance indexes of the website which helps in delivering a better user experience for the visitors.
Analytics
Analytical cookies are used to understand how visitors interact with the website. These cookies help provide information on metrics the number of visitors, bounce rate, traffic source, etc.
Advertisement
Advertisement cookies are used to provide visitors with relevant ads and marketing campaigns. These cookies track visitors across websites and collect information to provide customized ads.
Others
Other uncategorized cookies are those that are being analyzed and have not been classified into a category as yet.
SAVE & ACCEPT
wpDiscuz
4
0
Would love your thoughts, please comment.x
()
x
| Reply