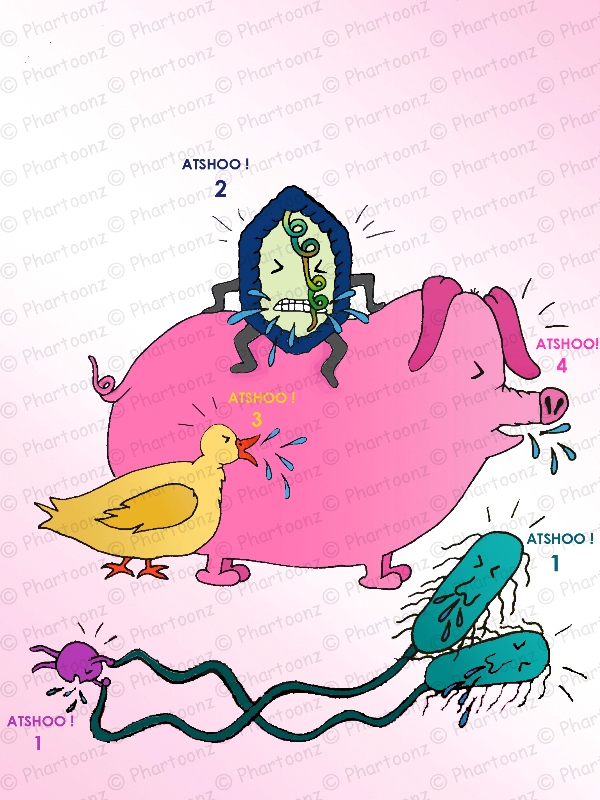 When you wake up sneezing , coughing, having a headache or muscle pain ..

How do you know whether you are experiencing cold or flu?? … And if it’s flu , could it be Swine or Avian flu?

cough may persist a little longer after the worst of the cold is over .

– Most of the time start first with a sore dry throat  , which usually goes away after a day or two .

– Runny nose followed by congestion along with a cough by the fourth and fifth days .

–  Feeling hot but in general a high temperature will not be present .

– slight fever is possible but not common , Children are more likely to have a fever with a cold than adults .

the presence of High persistent fever may be an indication that the patient has flu rather than a cold .

– Headache and pain above or below the eyes , that’s mainly due to inflammation and congestion of the nasal passages and sinuses ,

the headache is usually worsened by lying down or bending forward .

The most common complication of cold is Earache , especially in children .

earache is mainly due to blockage of the Eustachian tube  ” tube which connects between middle ear and nasal cavity  ”  ,

when the Eustachian tube is blocked , the ear can no longer be cleared by swallowing and may feel uncomfortable or deaf

Decongestants and inhalations can be helpful

this is an ideal site for a secondary bacterial infection to settle called AOM ( acute otitis media) which is very very common in children every where !

in this case the ear becomes painful not just blocked .

Also there is evidence that both paracetamol and ibuprofen can be effective treatments for AOM .

analgesics to relieve the sore and pain sensations

Vitamin c , a systematic review found that high doses of vitamin C ( over 1 gm pre day ) makes a reduction of approximately 15% in the duration of colds .

pharmacist should be aware of adverse effects of OTC medicines.

patients should be advised to see their doctor in 10–14 days if the cold has not improved .

Flu symptoms are usually more severe than cold symptoms and come on quickly .

– it’s common to experience fatigue and feel run down for a week or more .

Complications are much more likely to occur in the very young, the very old and those who have pre-existing heart or lung disease (chronic bronchitis) .

Warning that complications could be developing is noticed by severe or productive cough, persisting high fever,
pleuritic-type chest pain or delirium .

Most cases of flu usually resolve within 7 days without  treatment with antiviral drugs ( ex : zanamivir , amantadine and rimantadine )

But they should be considered if the patient is at risk for complications ( old , diabetes , history of lung diseases , .. etc )

Patients are advised to avoid crowded places and excessive contact with others as adults are contagious from the day before symptoms start ,until 5 days after the onset of symptoms .

it’s Not common to catch an Avian flu Unless you often get into direct contact with poultery… it’s not transmitted from one human to another “yet !” .

Infected birds shed influenza virus in their saliva, nasal secretions, and feces , Exposure to one of those is considered most likely during feeding , slaughter, defeathering, butchering, and preparation of poultry for cooking.

Also , getting in contact with sick or dead domestic poultry or surfaces contaminated with poultry feces , or consumption of incompletely cooked poultry can transmit the virus .

So , if a patient is suffering from flu symptoms and owns a small flock of chicken & Ducks or something .. ask him how the Birds are doing ?

Symptoms are similar to (although usually more severe than) other types of flu :

– respiratory symptoms such as a sore throat and cough

Avian influenza cannot be detected by symptoms alone, it is usually diagnosed by collecting a swab from the nose or throat during the first few days of illness to be sent for laboratory tests ( ex: PCR ) .

1) Development severe illness and if not treated could lead eventually to death .

2) the risk that the virus – if given enough opportunities – will change into a form that is highly infectious for humans and spreads easily from person to person .

Most H5N1 viruses (which cause Avian flu ) appear to be resistant to amantadine and rimantadine, .

Other antiviral medications as oseltamivir (commercially known as Tamiflu ) and zanamivir (commercialu known as Relenza ) , would probably work good , but additional studies are needed to demonstrate their current and on going effectiveness.

– Wash your hands with soap and warm water for at least 20 seconds before and after handling raw poultry and eggs.
– While Cooking poultrey , make sure you Clean Knives and other cooking utensils with soap and hot water after using them to prevent contaminating other foods.
– make sure you cook poultry to a temperature of at least 74ºC ( 165ºF ).
– Cook eggs until whites and yolks are firm.

H1N1 virus is spread from person to person, similar to seasonal influenza viruses. It is transmitted as easily as the normal seasonal flu and can be passed to other people by exposure to infected droplets expelled by coughing or sneezing that can be inhaled, or that can contaminate hands or surfaces.

But , it is not transmitted by eating pork as long as it’s cooked properly .

Signs of the swine flu are very similar to the regular one , including :

–  vomiting and diarrhoea are seen in many cases .

However ,The majority of Patients experience mild illness and recover fully without any kind of treatment.

Aggrevation  and worsening of symptoms  , This usually leads to a severe illness as pneumonia and
respiratory failure and eventually death .

some groups of people appear to be at higher risk of more complicated or severe illness, including:

People should seek medical care if they experience shortness of breath or difficulty breathing, or if a fever, and especially high fever, continues more than three days.

For parents with a young child who is ill, seek medical care if a child has fast or labored breathing, continuing fever or convulsions .

– Supportive care at home , resting , drinking plenty of fluids and using a pain reliever for aches and pains  is adequate for recovery in most cases.

– A non-aspirin pain reliever should be used for children or adolescents under age 18.

–  patients who are at increased risk of developing complications or with severe illness and worsening symptoms should get an early treatment with Early treatment with antiviral drugs ( oseltamivir ” Tamiflu ” or zanamivir ” Relenza” ) .

– people who are ill should cover their mouth and nose when coughing or sneezing and stay home as much as possible until they are fully recovered and healthy again .

– avoid the unnecessary touching of the eyes , nose and mouth .

– good cleaning of the hands regularly with soap and water and personal hygiene are very important too .

– pork (pig meat) and other products derived from pigs should be cooked at temperature of atleast 70°C ( 160°F ) to insure complete killing of the virus .

thannks 4 the information …..its in time…am im sneezing all the time 4 my firdt day of sneezing but there’s no rise in temp. ,but runny nose with slight feeling hot …so affter this topic i can see i suffer from cold…… thank you again 🙂

it’s weird but really , after finishing this post i went to bed and woke up suffering from cold 😆
i hope you get better soon
God bless you
🙂

Hello, I enjoy reading all of your article. I like to write a little comment to support you.

This website uses cookies to improve your experience while you navigate through the website. Out of these, the cookies that are categorized as necessary are stored on your browser as they are essential for the working of basic functionalities of the website. We also use third-party cookies that help us analyze and understand how you use this website. These cookies will be stored in your browser only with your consent. You also have the option to opt-out of these cookies. But opting out of some of these cookies may affect your browsing experience.
Necessary Always Enabled
Necessary cookies are absolutely essential for the website to function properly. These cookies ensure basic functionalities and security features of the website, anonymously.
Functional
Functional cookies help to perform certain functionalities like sharing the content of the website on social media platforms, collect feedbacks, and other third-party features.
Performance
Performance cookies are used to understand and analyze the key performance indexes of the website which helps in delivering a better user experience for the visitors.
Analytics
Analytical cookies are used to understand how visitors interact with the website. These cookies help provide information on metrics the number of visitors, bounce rate, traffic source, etc.
Advertisement
Advertisement cookies are used to provide visitors with relevant ads and marketing campaigns. These cookies track visitors across websites and collect information to provide customized ads.
Others
Other uncategorized cookies are those that are being analyzed and have not been classified into a category as yet.
SAVE & ACCEPT
wpDiscuz
7
0
Would love your thoughts, please comment.x
()
x
| Reply