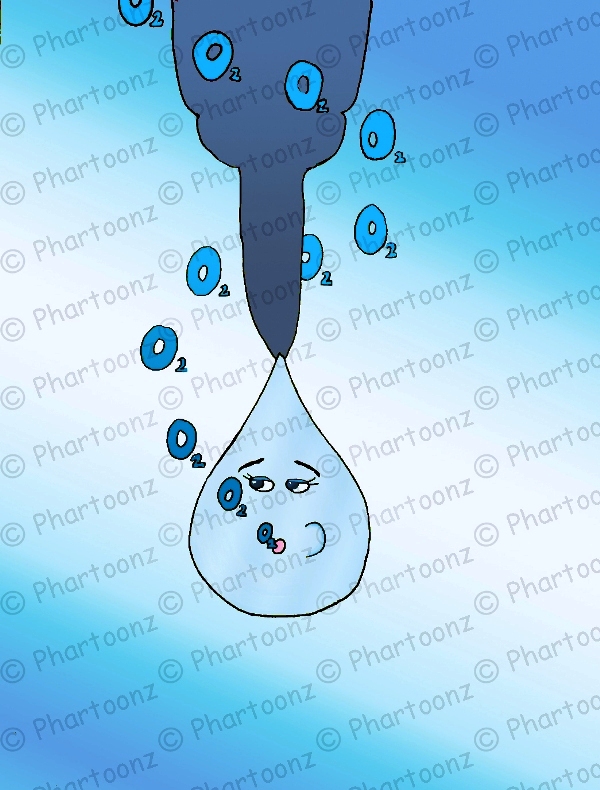 One of the essential elements for human existence

( + being my favourite gas element in chemistry 😎 )

Some consider this element as ” Vitamin O ” and claim it could treat or prevent serious diseases such as cancer, heart disease, and lung disease by enriching the bloodstream with supplemental oxygen .

This post is not concerned with easily memorized toons and hints about pharmacology ,

– but i couldnt resist making a toon first :blush: ! –

Two types of products have been introduced to the market , especially Online shopping :

It was firstly created and manufactured In the late 90’s by a company called Rose Creek  ,

the company was Charged by the FTC and required to stop making claims that this particular product ” so called Vitamin O ” had any type of health benefit because nothing could actually be proven on it .

There are tons of such products on internet pages ,

Beside prevention and treatment of serious diseases like Cancer , some products advertise additional uses , for example  :

– adding some drops of the product to drinking water to Purify it .

– washing vegetables and fruits with the product to keep it fresh for longer time upon storage .

– also some claim that a couple of drops could be added topically on wounds to inhance the healing process & on insect bites to relieve stinging and itching .

and the list iust Keeps going on and on … !

There is No scientific evidence that using or drinking these products would  have any health benefits and actually There really isn’t such a thing as ” Vitamin O ” ..

In the Vitamin O advertising , they claim that “oxygen deficiency” or “oxygen starvation” is a big cause of disease and that the oxygen content of the earth’s atmosphere has been decreasing and junk food does not contain enough oxygen !!

These claims are not accepted for several reasons ,

-There is no evidence that these products actually deliver oxygen to the body .

It is possible to use an electric current to add a tiny amount of oxygen to water, but to get it into the blood stream , a human would need gills or turn into a mermaid or something !

as Oxygen enters the bloodstream through the lungs Not the GIT .. and The body adapts to what it needs by changing its breathing rate.

– The oxygen content of air is not changing and remains constant at 21% regardless of the weather.

– If enough oxygen is available to sustain life, the body will extract what it needs from the air and deliver it to the cells , and the rest returns to the lungs to be exhaled out of the body.

–  Vitamin O products are theoritically safe .. But there aren’t enough clinical trials to prove it .

–  since sodium chloride (salt) is present ; patients with high blood pressure should be aware .

– As most drugs and supplements , It’s not recommended for pregnant or breast feeding women

while working in the pharmacy i found one liquid oxygen supplement called Aquagen ..

it’s sometimes prescriped by doctors for eldery people … i saw it on prescriptions with my own eyes !

when i gave it a look , i found it consists of Sodium chloride salt ” NaCl ” and Oxygen molecules are bound to the salt particles by weak bonds ” van der Waals forces ” .


much steering , metal spoons and cups should be avoided.

Aquagen is new but i dont know whether it is really effective or not :ermm: .. i asked some doctors & they told me that it’s effect is mostly phscological for patients who feel better and calm when they take medications ” placebo effect”


if anyone has more information , please enlight me :happy:

Hint : the source of the last paragraph is my uncle’s Pharmacy ^_^’

What a great resource!

I think this write up was secretly a sweet start to a potential series of write ups about this topic. A lot of writers act like they comprehend what they are talking about when it comes to this topic and in reality, nearly no one actually get it. You seem to understand it however, so I think you ought to take it and run. Thanks a lot!

This website uses cookies to improve your experience while you navigate through the website. Out of these, the cookies that are categorized as necessary are stored on your browser as they are essential for the working of basic functionalities of the website. We also use third-party cookies that help us analyze and understand how you use this website. These cookies will be stored in your browser only with your consent. You also have the option to opt-out of these cookies. But opting out of some of these cookies may affect your browsing experience.
Necessary Always Enabled
Necessary cookies are absolutely essential for the website to function properly. These cookies ensure basic functionalities and security features of the website, anonymously.
Functional
Functional cookies help to perform certain functionalities like sharing the content of the website on social media platforms, collect feedbacks, and other third-party features.
Performance
Performance cookies are used to understand and analyze the key performance indexes of the website which helps in delivering a better user experience for the visitors.
Analytics
Analytical cookies are used to understand how visitors interact with the website. These cookies help provide information on metrics the number of visitors, bounce rate, traffic source, etc.
Advertisement
Advertisement cookies are used to provide visitors with relevant ads and marketing campaigns. These cookies track visitors across websites and collect information to provide customized ads.
Others
Other uncategorized cookies are those that are being analyzed and have not been classified into a category as yet.
SAVE & ACCEPT
wpDiscuz
3
0
Would love your thoughts, please comment.x
()
x
| Reply