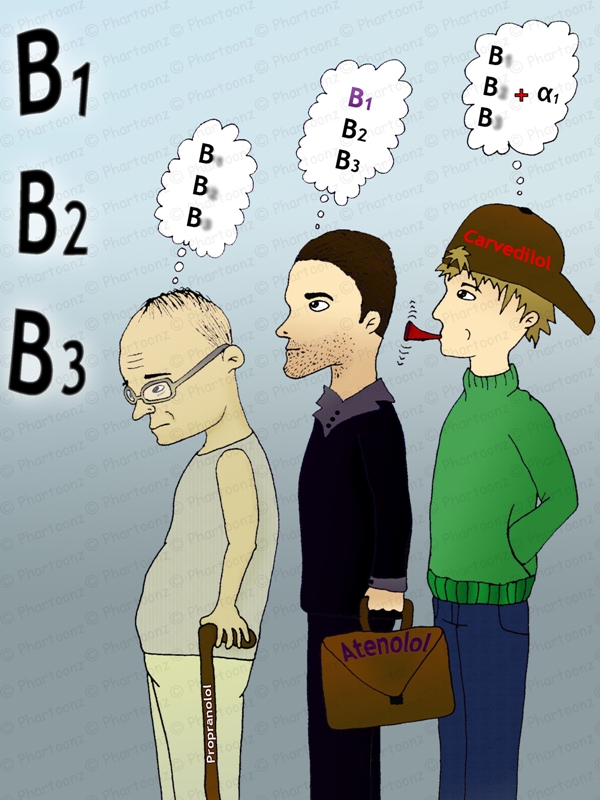 ” Beta receptors will be illustrated in other coming posts  “

notice the old man in the toon ↑

Mr . Propranolol needs to change his glasses ! , he can read the large β Letters but he cant get a clear vision of their numbers  :blink: ” Non selective “

Hint : Propranolol was the first beta blocker ever to be introduced into therapy in 1965.

notice the business man in the toon ↑

Mr. Atenolol is a very hardworking man .. He focuses all the time on his One and only target  😎 ( β1 selective )

and since β1 is mainly found in the heart, drugs of 2nd generation are often referred to as :

Mmmm … i think i should have drawn a heart on Mr. atenolol’s tuxedo :whistle:


so , in case of hypertensive patients with asthma , the Beta blocker of choice is Atenolol ( selective to β1 only & has nothing to do with β2 )

Back to the toon , notice the young man with a cap ↑

although Mr. carvidilol is young but he is far from the  Flying Betas so he cant recognize their types ( Non selective )

You probably wonder what’s that thing in his mouth , and  No it’s not a cigarette ..

Mr. Carvidilol likes to blow red cylindrical Gum .. this reminds you of something ?

thank you Dina :happy:
more pharmacology posts are coming up soon isa , Just pray for me 🙂

Thank you for your great article !

I’d like to ask , If the dose of selective B1 blocker increased ( Ex: atenolol ) , does this lead to blocking of B2 receptors ?

Mohamed: I’d like to ask , If the dose of selective B1 blocker increased ( Ex: atenolol ) , does this lead to blocking of B2 receptors ? There is no drug with absolute pure effect on one receptor , even in Normal doses selective B1 blockers aren’t 100% acting on B1 , actually they block some B2 receptors but in very few number that doesn’t cause side effects .. so it can be ignored , In Higher doses , more B2 will be blocked causing difficulty in breathing & bronchospasm but the worst would be that more B1 in… Read more »

i cant find words to thank you gor this website and the great effort you exirt …..i konw about it just now and from now i think i will not leave it ,but i ask you for some thing ….i’ll be greatfull if u provided us with thw links of the sources if they are web sitess….. thank you alot 🙂

Ok Sure , i’ll leave links for the websites i use from now on 🙂
Thank you very much 🙂

This website uses cookies to improve your experience while you navigate through the website. Out of these, the cookies that are categorized as necessary are stored on your browser as they are essential for the working of basic functionalities of the website. We also use third-party cookies that help us analyze and understand how you use this website. These cookies will be stored in your browser only with your consent. You also have the option to opt-out of these cookies. But opting out of some of these cookies may affect your browsing experience.
Necessary Always Enabled
Necessary cookies are absolutely essential for the website to function properly. These cookies ensure basic functionalities and security features of the website, anonymously.
Functional
Functional cookies help to perform certain functionalities like sharing the content of the website on social media platforms, collect feedbacks, and other third-party features.
Performance
Performance cookies are used to understand and analyze the key performance indexes of the website which helps in delivering a better user experience for the visitors.
Analytics
Analytical cookies are used to understand how visitors interact with the website. These cookies help provide information on metrics the number of visitors, bounce rate, traffic source, etc.
Advertisement
Advertisement cookies are used to provide visitors with relevant ads and marketing campaigns. These cookies track visitors across websites and collect information to provide customized ads.
Others
Other uncategorized cookies are those that are being analyzed and have not been classified into a category as yet.
SAVE & ACCEPT
wpDiscuz
6
0
Would love your thoughts, please comment.x
()
x
| Reply