The step where the drug structure changed thus its properties also changed. The most influenced organ for metabolism is the liver , also some drugs may have first pass metabolism in liver like nitroglycerin.

Drugs that have a high rate of metabolism have a low degree of bioavailability , the route of administration of those drugs plays an important role for example  we can’t give nitroglycerin PO , as about 90% of its dose will be eliminated by first pass metabolism leaving the body with no effect !

Phases of metabolism : Phase I and Phase II

Drugs will be biotransformed by a predictable rates described by two principles : 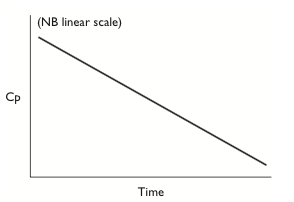 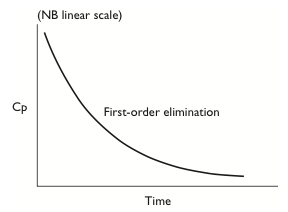 Describe the process by which the drug or biotransformed drug is eliminated from the body. The major routes of excretion  are :

drug clearance defined as the rate of which drug is eliminated from your body, it means the volume of blood cleared from drug per unit time L/h ;  for every drug in any organ has a clearance like renal clearance , hepatic clearance .. etc

Total clearance is the summation of every organ clearance.

The rate of drug elimination is directly proportional with plasma concentration Cp , Thus :

So the rate of elimination  = constant  * Cp

This constant in the previous equation is the clreance (CL)