Of course whenever we think about drugs of abuse and addiction, some members of the following list came to our mind:

Disclaimer : Information and names listed below are for educational & scientific purposes only.

Heroin is synthesized from morphine in a relatively simple process. Heroin was used instead of codeine and morphine for patients suffering from lung diseases such as tuberculosis. Heroin could be synthesized through the acetylation of morphine in a 10 step process to bring the final product.

“Smoking crack” and “snorting coke” are the widely used terms that describe the use of Cocaine. It is an alkaloid the present in Coca leaf.  The method of extracting cocaine from coca leaves doesn’t require experts to do it. It is like 1) Extractions 2) Purification & 3) Converting the base to salt in HCL format.

Marijuana is classified as a hallucinogenic drug. The main active ingredients in the plant are cannabinol, cannabidiol, and the tetra-hydro-cannabinols (THC).  THC is the constituent responsible for the hallucination effect of Marijuana.

psilocybin and psilocin are indoles found in certain types of Mushrooms and responsible for the hallucinating effect.

Psilocybin was the major component in the mushrooms, and psilocin is a minor component. However, psilocybin is very unstable and metabolized to psilocin in the body.

It is an hallucinogenic substance produced from lysergic acid, which derived from the ergot fungus. It is the most potent hallucinogen known up to now. Dosage of LSD is measured in micro-grams ; 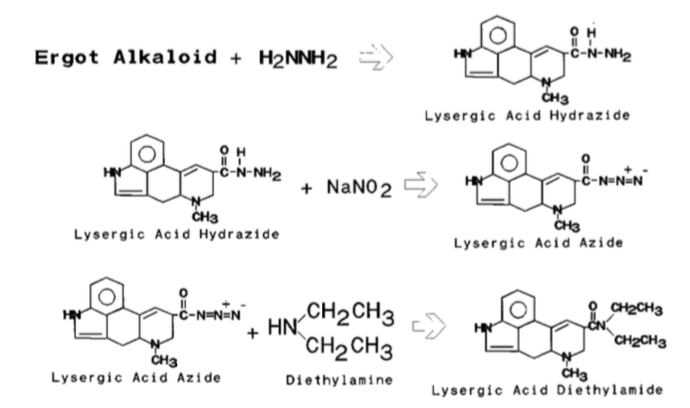 phenyl cyclohexylpiperidine or commonly known as PCP. It was used in veterinary medicine as a powerful tranquilizer. Used in the manufacture process of certain types of cigarettes.

It is synthetic narcotic analgesic with powerful potency approximately from 50 to 100 times potent that morphine. It was used for the relief of post operative pain. There are many derivatives and analogues of fentanyl that vary in potency. It is know to addicts as “China White”.

This class of drugs contain the base chemical structure phenethylamine. The members of the class can be synthesized by modifying the structure by adding or removing chemical group. The effect of these class of illicit drugs is either hallucination or stimulation.

The parent molecule of this class is Amphetamine a CNS stimulant.

The complete list of derivatives and their biological effects can be found here :

Known as Cat, Jeff, Mulka or Ephedrone, commonly know by slang or street name as CAT.  It is a stimulant that related to methamphetamine and cathinone. It is snorted, could be taken orally by mixing it with water and it can be injected intravenously.

It is KHAT, Chewed and very popular in southern Arabian peninsula (YEMEN). It is stimulant & its effects are similar to the effects of amphetamine. The active ingredients in Khat are cathinone and cathine.

Finally, every single drug could be abused if misused or overdosed! there is one more class that is widely abused, it is Anabolic Steroids. I am going to write about it in a different article.