Phartoonz » What do you need to know about insulin formulations ?

There are three main characteristics of insulin :

Onset which is the length of time before insulin reaches the bloodstream and begins its intended action.

Peak time which is the time during which insulin is at its maximum strength in terms of lowering blood glucose levels.

Duration  which is how long the insulin continues to lower blood glucose.

Rapid-acting insulins, such as insulin lispro , insulin aspart and insulin glulisine begin to work about 15 minutes or less after they are injected, peak in about an hour, and continue to work for 2 to 4 hours.

Intermediate-acting insulin  generally reaches the blood-stream about 2 to 4 hours after it is injected. it peaks 4 to 12 hours later, and is effective for about 12 to 18 hours.

long-acting insulins such as insulin glargine and insulin detemir have continuous, “peakless” action that mimics natu-ral basal (background) insulin secretion. Although it provides a long lasting effect, insulin glargine’s onset is between 2 and 4 hours, and its duration of action is approxi-mately 24 hours.

Premixed insulins may be convenient for those who mix Intermediate-acting insulin and regular into one syringe. Often, the insulin is premixed in a prefilled pen, a portable and accurate means of administering insulin, replacing the traditional vial and syringe.

How to inject insulin – an easy way illustrated with images ? Full Guide is here!

Insulin formulations with brand names that are available in the market (2007): 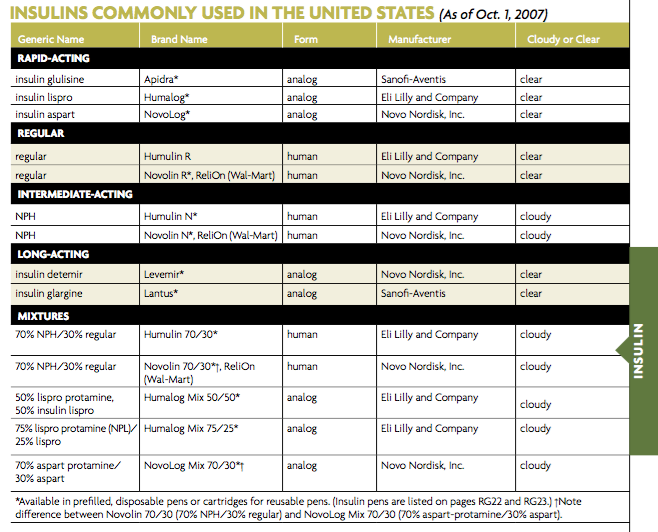